Trans Iowa V7: So What Have You Just Gotten Yourself Into? 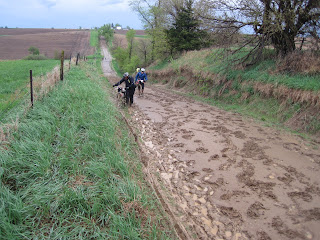 <==="Killer Bee" has an entirely different meaning in Trans Iowa.

I'll tell ya "how dare I", I've seen it six times before happen where folks with every intention of coming to toe the line do not do it. Yes- they have their reasons. Let's just say, "reality bites" and many won't come that intend on doing so today. I've got a system all set up to deal with that too, but I won't get into it now. That will come later.

Fact is a lot of the rookies won't be there in April, and a few of the Veterans and Finishers probably won't either. Yes- we have a 100 on the roster when registration closes, but how many will actually show up? In the end, I will be surprised if we have a record field take the start, and that would be more than 64 folks. (T.I.V3)

Then you'll line up at 4am, (maybe), and all your strategizing will be blown up in your face within two hours of riding. (Ask the vets and finishers, they'll tell ya all about it)

You've gotten yourself into a ride with some history in its seven short years of existence. If you haven't read about it, you can hit this site for some catching up. If you end up riding in V7, your name will be part of that story. Speaking of stories- Trans Iowa V3 got a whole chapter devoted to it in this published tome by author Zach Dundas. Who knows? maybe V7 will get it's own nationally published piece.

At any rate, you'll have a story to tell to the grandkids, if ya'all have any, that is.

You've gotten yourself into an event with its own myths. Like the one that says that every other year is a good weather year at Trans Iowa. You can believe that myth all you want to, and probably doubly so, since last spring at Trans Iowa was horrendous. Me? I ain't bitin'. Ya see, T.I.V1 was no picnic, and according to this "myth", it should have been a pleasant weather year. Uh huh.......right! Tell that to the decimated field at Algona, Iowa where wind had ravaged the competitors to the point where several had dehydrated, and some had crashed due to the severe gusts of wind. Tell that to the nine guys who braved 28 degree temperatures through a starry night to be the first finishers of Trans Iowa. Yeah......the weather was awesome! Ha! (I will admit that V2, V4, and V6 were, well...........awful!) 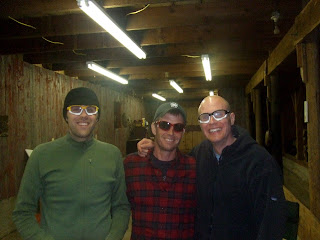 You've gotten yourself into an event where you just might make some life-long friend of some cycling freak you've never met before. You'll definitely be changed.

You've gotten yourself into an event that is really tough, and not finishing it is still cool. (How weird is that?) However; not finishing it may also eat at your mind for the other 363 days of the year until you can line up to take a crack at it again.

You've gotten yerself into a great big pickle. Maybe you'll show up and see just how it really is for yourself. Maybe.

Welcome to the Trans Iowa V7 roster folks, and to those few more that make it in today. I hope you all make it to Grinnell in April next year.

But I won't be holding my breath on that thought either!
Posted by Guitar Ted at 1:00 AM

I remember riding that B road with friends Gus Peters and my riding partner Hellmut. I wore out my disc pads in less than 40 miles, my pro built drivetrain was jumping all over the place, I had lost my toe warmers, My wool shorts were soaked and soggy. All my preparation has just washed down the drain. I plan o being there next year but without damned disc brakes.
Ari
Thanks for the opportunity G.T. and D.P.

"Then you'll line up at 4am, (maybe), and all your strategizing will be blown up in your face within two hours of riding"

v4 - Snow and 25+ MPH head/sidewinds. Never seen so many strong riders that cashed and not wanting to continue after just 100 miles

v5 - Big Joe losing a derailleur less than 20 miles in and no spare. First checkpoint came and then it was either flat plains with no where to hide from the wind or big rollers that left you wanting to curl up somewhere.

v6 - All strategy out the door within the first 40 minutes. Rain, lightning, that section of B road. Still not sure if I was happy to just make the checkpoint, or would have been better off missing it by two minutes.

How very true. This "race" somehow works its way into the depths of your brain. This will be my 3rd attempt and I REALLY hope I finish this time so maybe I can let it go. And I do believe in the alternate year weather plan (having attempted V4 and V6), V1 was the exception that proves the rule.

Some excellent insight! Thanks for putting this race on Guitar Ted and D.P.