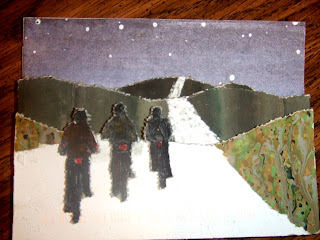 Well......some of it is! Too bad! It isn't like I didn't warn ya'all that this blog would be used for "detailed T.I.V7 announcements too long for the T.I.V7 site."

I think ya'all will live through this.

Anyway, this awesome artwork was sent to me in four post cards over a week and a half. I had to assemble said post cards into what you see here.

I will be getting some glue, since the provided sticky pads are not quite up to the task, and then I am going to frame this work. Maybe I'll bring it to the Pre-Race Meat-Up to show off. We'll see. (Thanks Emily Brodersen!) 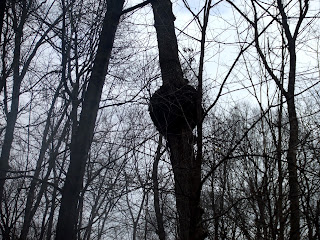 I went out for a ride at The Camp yesterday and I decided to stop and take a pic of this odd tree out there. This bulbous knot goes all the way around the tree bole about 25 feet above the floor of the woods. I call it "Nature's Water Tower" because it reminds me of rural water towers found in the small villages in Iowa.

I have no idea what might cause something like this, but maybe one of you readers out there has an idea for me.

Speaking of The Camp, there will be a "Turkey Burn" ride on the Saturday after Thanksgiving on the South side of Camp. I think we're getting underway about 8am.  If ya need directions, I can fix ya up if you think you might want to head out for some fun riding. 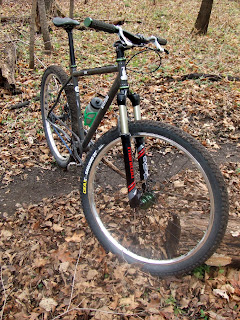 The Camp trails on the South side have been raked, and besides a few dead fall trees, everything is rideable. The recent wet weather was all soaked up by the dry ground and if we avoid any precip before the Turkey Burn, it will be bone dry and hard as a rock again soon.

An Issue Of Weight: The issue of wheel weight and how it affects the ride of a bike came up yesterday on mtbr.com. Interesting stuff.  essentially, it all boiled down to stability. Less weight = more instability. Conversely, more weight seems to keep your wheels planted, and on line, not only making them stronger as well. (Well, if they are going to weigh more, they had better be stronger!)

I think this is true to a point. Obviously, you don't want to have a wheel heavier than need be. Conversely, a wheel that is so light that it starts to "ping" around off stuff is no good either. What is the "magic" balancing point? Well, most wheels are certainly light enough, (speaking in terms of 29"er wheels here). Several folks think they need sub 1600 gram wheels and for mountain biking, (read: NOT racing), that is just silly. Heck, a lot of road racing wheel sets weigh this much! 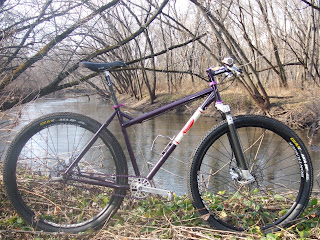 I have some very light 29"er wheels, some medium weight 29"er wheels, some heavy weight ones, and some that are ridiculous. I know most of the wheels "in the middle" ride just fine. The extremes are a little more unpleasant to ride. Too much of anything is not a good thing, they say, and that goes for wheels. Too little mass, and the wheel gets sketchy- easier to knock off line, and doesn't track off road well. Too heavy- The wheel is harder to accelerate, feels "dead", and is actually harder to steer.

And I haven't even begun to talk about flex, (which can be a very good thing), and strength, both very important functions of a wheel as well. Maybe I'll talk about this some more tomorrow.

Or maybe I'll post about Trans Iowa again, just to be contrary! Ha!
Posted by Guitar Ted at 1:00 AM

the tree growth might happen to be some cancerous burl...worth $$$
(purple el mariachi?)

that tree growth is called a gall (burl is another name for it, but I think specifically burls and galls may be slightly different things). These growths are commonly caused by a bacterial infection that causes excessive cell division (so calling it "cancerous" or a "tumor" is technically correct as well). The excessive cell division is also accompanied by excessive production of certain compounds that the bacteria can then use for energy and growth. The bacterium quite literally genetically engineers the tree's cells to overproduce food!

The South side of the Camp is fantastic. What a job Karmen et al did. It is fast and fast. Good times.
John

@Jay, @Michael day: Thanks guys! I knew someone would know. I have seen some trees in Iowa with a lot of that sort of thing all over them, but never just one big bulbous tank-like protuberance like that.

Being a guitar player, "burl" and "birds eye' patterns are well known to me.

Hmm....maybe there's a guitar hiding in there, eh?

So what is the current forecast for Saturday's Turkey Burn looking like? Looking forward to riding a new to me trail.