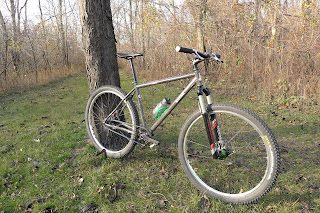 Okay folks, this is the last of this series on "The Belt" vs "The Chain". First though, an update on what has been going on since the last time I posted on this.

I installed a Manitou Tower Expert 100mm travel suspension device on the front of the XXIX. Whew! What a relief to my paws and a major boost to the handling that was! A few more rides revealed no more issues with "The Belt". However; the belt tension is so tight that even with my "throwing" the crank arm as hard as I can backwards, the crank will barely spin one revolution. In contrast, all of my chain driven single speeds spin multiple times around at the crank when doing a similar "throw".  What does this prove? Well, nothing except that there is excessive drag in the belt system which is either due to the tension of the belt resisting engaging with the cogs, or the side loading of the bearings. Probably some of both.

This tells me two things. One: The tension necessary to maintain proper belt/cog interface during hard efforts also decreases efficiency of the system overall. Two: Premature wear of bearings is a distinct possibility.

Now, as for "The Belt" working in a mountain bike setting, I give the system a passing grade. Yes- it works. However; one must "count the costs", both real and in a design sense, in regards to using the Gates Carbon Belt Drive.

First off, let me say that Gates is working very hard to minimize the drawbacks, and someday, (perhaps), they will achieve lower costs, better design integration, and more choices in gearing options. (I speak strictly in terms of mountain biking/racing mountain bikes) However; this is now, and Gates is not there today with those goals accomplished.

So, to get a belt drive to work on a reasonably priced single speed, we have this example of the XXIX. A bike with some serious compromises to geometry, (long, even for 29"ers, chain stays, weird drive line), and efficiency that is lowered due to tension requirements of the belt itself. Whether this will also affect future drive train life expectancy is question not yet answered, but signs point to earlier failure, (snapping, crunching sounds from the free hub body already at this early stage.)

Another point to consider is the current cost to invest into the system. You obviously will need a frame that is compatible with a belt, (currently a very limited selection), and you may need to swap out to a different belt/cog combination. This will prove to be quite expensive, as the current costs of cogs is in the neighborhood of $110-$135.00 and belts are around $65.00-$70.00 each. (You can't simply change the length of a belt, you will have to have different lengths to accommodate different cog options.)

Belt drive fans will tell you several "advantages" over chains, but only two things they say really matter. (The rest are not really advantages over chains in single speed applications.) One: Belt drive set ups are lighter than chain drive. Two: Belts and cogs will outlast chains and chain rings in terms of lifespan. This is somewhat offset by the fact that the looming early wear issues on the bearings are still out there, the efficiency of the entire drive train suffers, and obviously, in terms of costs.

Conclusions: The short and simple is this: Belts are not better than chain drive systems. Not in terms of single speed mountain biking. Belt drive has some advantages, but costs, unknown bearing wear issues, design constraints in terms of frames, and the limited availability of cogs and belts in all gearing ranges is holding belt drive back. For now "The Chain" is the obvious winner.

yep, chains don't bother me a bit and they work. No interest at all in going to a belt drive. Interesting reading though.

A surly stainless chainring, sram 830 chain and a shimano bmx freewheel is so cheap and simple compared to the Gates. I do admire how they keep improving the system.

Easy fix - use lower tension + a good snubber !
A snubber is a small bearing fixed next to the outside of the belt where the belt joins the Rear pulley. In normal use it doesn't touch the back of the belt, but if the belt is about the slip, the bearing prevents the teeth riding out.
Snubber were 1st used by lotus cars in the 1970's when toothed belts used to drive camshafts in cars.
Strida belt drive folding bike pioneered use of a snubber on belt drive bikes - with low tension a belt system is as free as a chain.
Belts are just as efficient as most chains (except the most perfectly aligned, and lubricated chains) - as soon as a chain gets dirty, worn or out of alignment (as on most derailieur gears) the belt beats it on efficiency. [both suffer when covered in cr*p - all enclosed would fix that].
This is why most of gates business is in industry - replacing chain drives for timing belts, to improve efficiency, to save energy and Co2.

@Mark Lloyd: No, I would disagree with you on a couple points. #1: Snubbers are not common place. I can't just run down to the bike shop and get one. Secondly, Gate isn't going in this direction. They want to have nothing but their belt and two cogs to be the system, and are working on wider belts, (12mm), and new ideas, (Center Track), to alleviate the tensioning issues.

Going further, I can not speak for everyone, but I personally have never had an issue with chains getting muddy, dirty, or what have you. (On single speed)Speaking of a belt vs a chain driven derailluer system is no comparison, since belt/multiple gear set ups by necessity must be an internal geared set up which brings along with it its own set of downsides.

Then you still have the extra expenses. Belt, cogs, and then a snubber? Look- talk all you want, but chain drive single speed set ups are still king, and will be for quite a while.

@GT - Thanks for a very thorough and thoughtful review. I really feel like I know what they are all about now.

Clearly no convert to belt drives then :-)

There are a few scenarios where they are better than chains you must agree- deserts where the grit would eat a chain, and for keeping pants clean in the city !

I like choices so belts are a keeper - as a nice option to choose, even if chains are OK for 95% of the time. (I bet Gates would lOVE 5% of the market !)

@Mark Lloyd: If the system doesn't beat what is currently available in terms of performance, ease of application, cost, and performance, then why would you "convert"?

I'm a commuter. Haven't had a grease mark on my pants legs in ten years. (Note: There are simple ways to keep your pants legs out of chains.......and belts!)

I also ride in sandy deserts about once a year, and we have plenty of fine sand where I ride locally. Again: It isn't a problem.

As I stated. Until belt drive systems do not compromise efficiency, design, and cost to use, they will not even be equal to chain drive, much less better.

Actually, once you include the frame mods, beefy chain tug that's pretty much mandatory, stiff/beefy chainstays to resist flexing under load even a smidge, etc, the weight ends up about the same as a good-quality chain drive.

Otherwise, I'm on the same page. Building around a belt requires throwing a lot of otherwise desirable things out the window, design-wise. What you get back isn't (IMO) worth it.