The Story Of My Badger: Part I 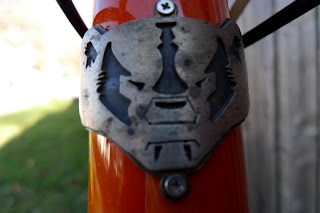 Preface: Badger Cycles was a custom bike builder run by Rob Pennell. Due to some extremely extreme circumstances, Badger Cycles went under and in the process, a lot of people got hurt. This story isn't about that.

The Beginnings: Basically the whole deal with this bike began in conversations I had with Rob over a period of several months. One day he called and offered to build me a bike. Yeah, it was like that. He shot me a preliminary price, and I said yes. The ball got rolling with a custom build that was to mimic my drop barred Karate Monkey with a few mods to the idea to better accommodate the drop bar set up.

Of course, this all was happening right about the time things were starting to go sideways with Badger Cycles. I only mention this because it has bearing on the story. A lot of time went by as I waited for this frame, most of the time, I actually was thinking it might be better if I didn't get it. That because of other folks circumstances. But in the end it showed up, and I squirreled it away for a while due to all the hullabaloo going on with Badger. 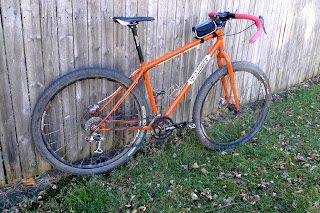 Eventually I got it built up. I really liked the bike. But I was not feeling good about showing it off, and I felt bad about taking it on rides where folks might get inflamed about the mere mention of the marque. It ended up getting shoved to the back of the shop in my basement. Ignored, but still there....

So after a bit, I needed some parts for other things, and eventually, the Badger was cannibalized. I even had thoughts of selling the frame, but who would want it?

Next time: The resurrection of Badger
Posted by Guitar Ted at 1:00 AM

I'd never sell that frame, the Allis Chalmers paint is just TO pretty! Reminds me of my dad's old D 17 Allis tractor that my brother owns now & has completly restored it.

Still a very cool bike Mark. All of that stuff is in the past. I wouldn't hesitate to bring that up here sometime if I were you. It's just a bike, a really pretty one.

I've always liked that bike. There were a lot of good ideas that went into the design of that bike. It's really pretty cool when you think about when that was built. It's not hard to find similar ideas used in bikes from Salsa or Singular. That bike was definitely ahead of it's time.

Thanks guys! That means a lot to me. I'll be doing a Part II where you'll see what motivated me to bring it out of the cobwebs....

A friend has one with a Lefty. Very nice details. GT, if you "really" want to off load it, I'd be willing to take it off your hands! ;-)
I look forward to your story on this bike. Thanks!

It's a unique bike with a story behind it. It deserves to get ridden and not stashed away somewhere. I know someone else with a Badger and he rides the snot out of it.

Pardon my ignorance but is that wonderful frame pre Salsa Fargo? I really think the design, build and color are stupendous.
ari

@Ari: Thanks for the complement. Yes- it was before the Fargo came out that this was designed.