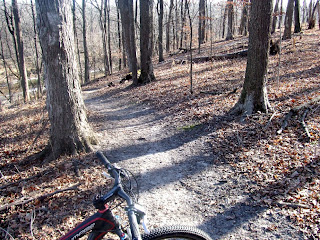 <===Scene from the Turkey Burn ride. Report on that and more on Monday.

Continuing on with the thoughts on a gravel grinder specific bike from yesterday's post. I laid out the basic geometry of the bike as I see it, now I want to get into some things that are maybe a bit strange, and certainly specific to my wants and desires.

The first thing that needs to be covered is the drop out question. I've seen many a Trans Iowa and Dirty Kanza 200 ride come to a screeching halt due to a rear derailleur getting ripped off, a replaceable drop breaking, or a integral hangar getting twisted beyond repair in the field. This would be less of an issue if one could more easily convert to a single speed set up in the field. This would be a workable solution if track ends, (with a derailleur hangar), or forward facing horizontal drop outs were used. Plus, then I could single speed this rig, if and when I wanted. (And I might want that) The other workable solution here would be to go with a split shell eccentric bottom bracket, but that is somewhat off the radar due to a brake idea Ben Witt and I have..... 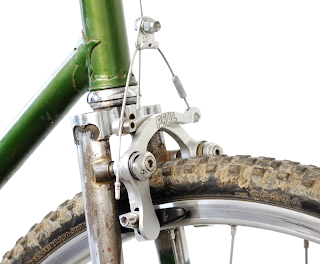 Yep! Here is where we go off the beaten path. The Paul Racer Brake is a replica of the old Mafac Racer brake that was in use years ago. As you can see from the photo, it has loads of clearance and it is quite powerful. What we are considering is putting it under the chain stays. Why?

We feel it will allow for an unencumbered seat stay which, since it won't have to resist braking forces, could perhaps be a bit more "flexible" and give a more comfortable ride over the long haul. Not to mention the fact that it will look sleek as all get out.

Yes, there are some technical challenges to fitting all that under there and have the cable work it. This may not happen in the end, at which time we would default to cantilevers, or at least I would. (Or maybe we'd just put the racer brakes on the seat stays after all, who knows!) Anyway, it will be a fun exercise to see if we could possibly pull it all off.

That's all for now. Next weekend there will be a few beers drank and some ideas batted around for this project. I may have some more to report later. Stay tuned....
Posted by Guitar Ted at 1:00 AM

sounds like you are getting close to a modified Cunningham Expedition. http://www.cunninghambikes.com/bicycles/26c.html

@wESd: Yup, I think that is definitely an influence. Mix up a Cunningham with a Matt Chester, you pretty much have it!

Chester+Cunningham-$=Surly Cross Check with a steerer tube extender and dirt drops. Fits up to a 45 has a bunch of extras for rack mounts etc if you want them and will not break the bank....and you could run fenders with at least a 38c

@Brent: Considered already. Too much BB height, too heavily built, too many compromises. A Salsa Casseroll, (the new one) was also under consideration.

supposedly there is a run of bikes being built by Potts that will be a Ti version of the Expedition with mini cams being made and to fit bigger tires. Will be interesting to see them if/when they are made

How about 36" tires for a gravel grinder?

@wESd: Oh yeah! That would be a killer set up. I know Mark Slate just had something along those lines built up by Potts.

@retroscool: 36"ers would be great, but the problem was/is that tires, rims, and spokes are like what a Schwinn cruiser from the 40's used in comparison to modern day stuff. Heavy, clunky, low quality, and not that high of a degree of engineering into 36"er stuff. It has potential, but not realized now, and may never be.

I really like the concept. Doing a back-of-envelope calculation it looks like you'd be looking at around 19" chainstays with the side mount racer brakes (about 1 cm of pull as set up per Paul Components instructions, with 1-2" of straddle cable towards the bow, 353 mm brake boss height and plus maybe 50-ish mm accounting for the 57-67 reach with the pivots set 78mm apart) - slightly longer than a long haul trucker.

If you're planning on using S-bend stays, then I reckon you could get some meaningful compliance if you use thin wall skinny stays. If you use straight stays, I can't see a comfort advantage.

I think the big advantage to the Racers is that the bosses are something like 80mm closer to the bridge than canti bosses, so the stays should have way less flex under braking. Putting them on the C-stays would be even more so. Things should be solid as a rock. Don't know if it's worth the routing/mounting hassle, but it should be worth experimenting with purely because it'll be so badass!

I hear you about the dropouts, like this: http://picasaweb.google.com/lh/photo/yjuB_FpqErIq6YcVDz8bRQ?feat=directlink

You have seen my posts on the Rock Lobster. ;)