The Story Of My Badger: Part II 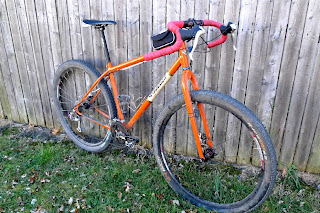 Preface: Badger Cycles was a custom bike brand run by Rob Pennell. Due to some extremely extreme circumstances, Badger Cycles went under and in the process, a lot of people got hurt. This story isn't about that.

The first part of the story was posted yesterday here.


After a while, I had pretty much forgotten about the Badger. That is, until another Badger came along, which was in the form of a certain limited edition single speed frame. The purchase of that bike led to a new interest in my older Badger. I started thinking about just stripping it down to a bare frame and hanging it up, and then I'd switch and think about building it up again. One thing led to another and I got busy with life which led me away from the orange Badger again.

So, after another year goes by, I am out riding with a good friend who asked me out of the blue, "What ever happened to that old Badger of yours? I haven't seen much of it lately." Well, little did my good friend know, but he sparked a flame that didn't die out with that comment.

At the time, I was riding the Dos Niner converted to a drop bar set up. It was.......not what I was hoping for. Eventually, I found myself staring down at the Dos in my shop, making the fateful decision to dismantle it and retire the frame for good. As I mulled over what to do with the parts, the Badger sprung to mind. I had done some minor assembly on the bike a while back, but it was basically unrideable. Had been for....years? I don't know. A long dang time anyway. So, I figured, hey! Why not put all this stuff on the Badger? 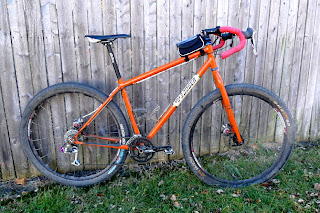 Well, I did, obviously, and I've been riding it some recently on Trans Iowa recon and around town. I found the bike is actually pretty dang good at what it was designed to do: Ride lots gravel for a lot of miles.

The bike was designed with long gravel road riding in mind. I made Rob put in the clearances for the 29"er tires, which he didn't really want to do at first, but I insisted that I had to be able to ride some single track with it as well as gravel roads. Rob and I went around a time or two with that Idea, but eventually he came to me with the design as we see it here. Rob went with long, 100mm suspension corrected length fork blades for a more compliant ride. At the time the bike was designed, this was odd. He also insisted that a 38mm offset was perfectly fine for a bike like this, even though at the time the move to make longer offset forks for big wheelers was well under way. This was one thing Rob wouldn't budge on, and to be perfectly honest, I was not at all happy about that. Now? I am really glad he stuck to his guns.

The fork length did another thing Rob was aiming for,which was to get me out of the need for a "goofy looking stem", as he put it, and to not need a long head tube, which he thought looked weird as well. He insisted I would be able to use a "normal stem", and he was right on about that as well.

The rest of the design came about from my fine tuning of my Karate Monkey. We got the seat tube size, chain stay length, and angles all from that design. The chain stay was set sort of long because at that time I felt the Karate Monkey was riding best with a chain stay setting just under 18", so that is about what Rob did here.

There were things I wanted that I didn't get, but I wasn't paying a premium price, and well......I figured I was lucky I got anything at all! One of the wires that got crossed was having to do with it being a single speed, and it ended up being geared, which at this point has worked out to be a good thing too. One thing I wanted, but didn't get, was a integrated rock guard at the bottom bracket, but there is always helicopter tape! (Someday I'm going to get that part though!)

The end of it all is that this bike, which was ahead of its time in many ways, is still a great bike and I will be upgrading some of the drive train over the course of the winter. Expect to see more of it if you are around riding gravel next year!
Posted by Guitar Ted at 1:00 AM

I love that bike GT.

@GNAT: It was your comment that spurred the re-interest in getting it back together again, my friend. Thank you for that!

Why are you glad me fought you on the 38mm offset?

Sounds like a COOL bike,GT,and pretty good back story as well. Interested to see what ya do with it =)

yep... that bike is a beauty. i've always loved it. never minded how the long fork made for a short head tube either. i bet the ride is awesome and with a suspension fork, it'd be great too. think about how cool that bike would look with drop bars and a maverick duc up front! i bet you could do it...

Sweet Motivation. I just scored a Badger from a friend that I've been eyeballing for years, he finally sold. Thought you might like to see what I'm doing with it, and thanks for the motivation...