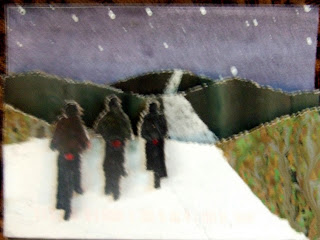 More On Support: Okay, okay.....I said I was going to cut off the T.I.V7 posts here for awhile, but I forgot to finish off my thoughts from the last update, (can be read here). So, suffer me this last assault on your senses regarding Trans Iowa, dear readers, and then I will really leave you be for some time...

But first, if you care to read a truly fine bit of wisdom, and you are a Trans Iowa Rookie, go here.

After I posted the last update, I received an excellent comment from a Trans Iowa vet that succinctly states what this post is about. These are his words and the bold type is his emphasis I think it is a widely held opinion amongst Vets and Finishers, so Rookies, read closely! . Here it is as it appeared on my last Update Post;

"Please emphasize that you are on your own along with the idea that having someone waiting in standby means somewhere else other than leap-frogging riders on the course.

It's important to have your backup/bailout plan in place, but it should be exactly that, a rescue. Not some circling mother-hen-type person(s) meeting riders at various points along the route to make certain you are okay. To me, that sounds a little too much like support.

Enjoy the very lonely feeling and isolation out there, oh so very alone suffering on Iowa gravel"
Consider that point "empathized"!
Okay, so we don't want folks out on course, which means no spectating! No spectating means "no one following anyone around." Nobody. Got that? This also applies to checkpoints, which we are going to discourage anyone from going to, (the first one), and forbid anyone going to the second one, which is on a remote intersection of two Iowa rural roads. No parking- no place to sit, no amenities, no restrooms, well.....I think you get the picture.
So, where should support people be? In their hotel, motel, or possibly another cool location. (I'll be making an announcement soon). Stay tuned on that front. We've got time to develop that idea yet.
Wireless Support: Finally, another T.I. Vet suggested this topic: The temptation to "connect" via cell phone while you are riding, or take calls from folks outside the event while you are riding. Tell me what you think: Having a voice in your ear while you would otherwise be "alone" out there is something good, no? Something that gives you a "boost", right? Well, doesn't that sound like "outside support"? I think it is.
While d.p. and I can not stop anyone from taking this sort of support, I would appeal to your honor as cyclists to not engage in any of that sort of thing. If you have to use a cell phone, let it be only to drop out of the event and call in for a ride. Basically, "Never Quit, Never Use You Cell Phone Unless You're Going To Quit". The only other reason for a call here is to get help in case of an emergency. Okay? Nuff said.
Just a word on cell phones in Iowa: (Well, Rural Iowa!): You may want to consider actually turning your phones off. Many a T.I. competitor has found themselves without a working cell phone due to the amount of roaming for signals your phones will be doing out in the digital hinterlands. Yes- believe it or not, but cell phone coverage stinks in the country away from main highways in this state, no matter what Verizon, or Sprint, or what ever phone provider says. Just keep in mind that when you are in the vicinity of a paved road you'll  generally get a  signal, and valleys are cell phone death areas. Get on top of a hill if you have to call. Finally, the rural Iowa citizen is generally a good hearted soul. Knock on a door if you have to.
Okay, that should about wrap it up on my "support series" on the T.I.V7 updates here.

@Wally Kilburg: Maybe you ate too much turkey? :>)

Sorry about the T.I.V7 minutiae, but if you had to endure some of the "whackery" that I see exuded from the participants and hangars on of this event, you would have a clearer picture of the "why" I have to post such nonsense.

I'll echo the sentiments on phone coverage. Plan on not having any signal in a lot of places. Best thing to do is turn it off and save your battery so u have it when you need it.

RE: Cars on the course. I've called people out on this before at other events. It's not fair to you and it's not fair to other participants. I had to deal with that at a DK race two years ago and it didn't make me happy.

@Steve Fuller: Yeah, there was more of that car non-sense at DK 200 this year as well. Unfortunately, with the soft stance on support they imparted this last time, I am afraid it may only get worse. Hopefully they address that.

By the way, Steve, I was wondering if you wanted to come and photograph T.I.V7. Let me know if ya do. I've got something special going on....