Wednesday was a planned quickie trip that Captain Bob and I took to the Twin Cities area to hook up with Jason Boucher, and Ben Witt. We were going to hit up the Murph and Leb trails for whatever we could jam in on a short afternoon, then head back home.

It was well worth it!

The day started out by getting to Milltown Cycles and having a quick lunch of grilled chicken breast and scallions with Ben before we checked out to hook up with Jason at the Murphy Hanrehan trail head. Jason brought over a couple Spearfish rigs, which Captain Bob and I happily hopped on. It wasn't long before we were cruising some fast, smooth Murph trail through the woods. 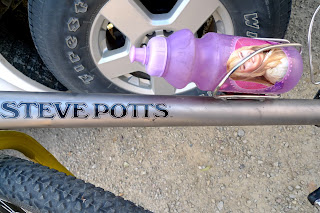 For whatever reason, it wasn't an "on" day for me. I couldn't go as fast as the other three out of the gate, and it took a long time for me to finally get a groove on. But I did, and the Spearfish was a lot of fun. Especially down hill.

The day was one of those kind of weird feeling days where you felt rushed to pack in as much as you could get in. Less sunshine, impending weather, and time constraints didn't help matters, I am sure. maybe I was just too stressed out going in. Probably was. I know I really needed that ride! 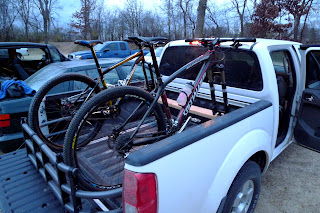 Then after Murph, we scooted over to Lebanon Hills to get Captain Bob initiated on those trails, which he had never ridden before. It was getting on in the day by this time, and the light was kind of weird. I decided to swap over to my Specialized rig I brought up for testing purposes. Rob stayed on a Spearfish.

About midway into the loop, I started to get real dizzy, my head was aching, and my vision was blurring around the edges. Bonk time!

I said something to the guys, and it was decided to shortcut the loop to the fast, swoopy, banked exit. We got sprinkled on here a bit. By the time we got back to the lot, dark clouds were rolling in. We all packed in our stuff and went over to Jason's house, and when we got there the skies cut loose with lightning, thunder, and very heavy rain. Maybe that headache/bonk was Divine Intervention? Maybe.

Anyway, we ate some pizzas with Jason's awesome family, and hit the road home. I got back very late, tired, and sore from sitting in a car for 3.5 hours after working so hard on a bike. But.....like I said,

It was a really great day! Thanks for the time everyone. Yeah ted, I know. Suffered a lot just trying to keep up with Ben and Gnat! Dudes are faaaast!

nice water bottle Ben. do you have matching socks?

Looks like a lot of fun. Sorry to hear you weren't feeling awesome, buddy. Love the looks of Ben's bottle, not to mention his sweet ti Steve Potts. Steve's frames are like jewelry you can ride for life. An inspired ride no doubt...