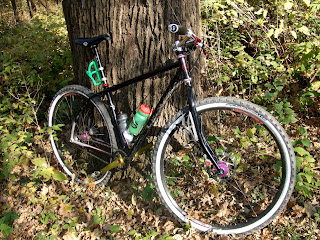 First, let's set the stage for what "conventional wisdom" says on this subject....

The old line always was that a "longer lever", (longer crank arm length), gave better power going up steep pitches on a single speed bike. Usually this was meant for 26 inch wheeled single speeds, and the crank lengths recommended were 180mm, or185mm if you could get them. (Today the Surly "Mr. Whirly" gives you those options, plus others are also available). 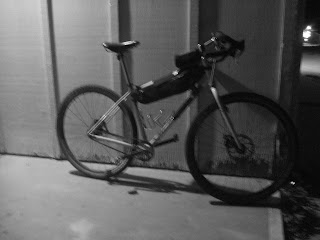 <===They only come out at night! (180mm crank arms on my single speed Gryphon.

Then I heard about some early 29"er freaks up in Crested Butte. Wes Williams and some others that advocated the use of 170mm cranks for 29"ers. Jeff Jones does this to a degree as well. Why? I tried to find out, but not much talking was going on, only that "it works" and I should just try it for myself.

I have used 170mm cranks on a 29"er single speed of one sort or another for three solid years or more.  Before that, I rode a 2003 Karate Monkey with Cooks Bros. 177.5mm cranks. (Yeah....weird, I know!) I have also ridden 180mm cranks right alongside the 170mm experiment on two other single speeds. With all this time on all these different crank lengths on single speed bikes, I have come up with a couple conclusions.

The Disclaimer: As anyone who has delved into the crank arm length debates knows, no real conclusions have been arrived at as to what really works in any given situation for any given individual. In fact, it may not matter at all for many riders, and to some, only one length crank will ever do. Me? Heck.....I can't even do the same dance step twice in a row!  I seem to be a pretty adaptable character in regards to this subject, but be that as it may, I have some thoughts to share.

Shorter Arms: In terms of running 170mm cranks on a single speed, I have found that it is at once easier to get on top of a gear and spin like a whirling dervish over any shortish climb. Longer climbs are okay if you can maintain a constant cadence with your gearing choice. Flats are harder, and forget about "mashing", where you simply let your body weight fall into your crank arm till bottom dead center, switch legs and repeat as necessary, slowly walking your way up a hill.

Longer Arms: Besides lending themselves marvelously to "mashing", I find that I like the longer arms on flatter terrain, actually. Bigger gearing, (higher gear inches), flatter terrain, and a "set it and forget it" cadence are awesome with longer arms. Usually, this is a lower cadence than I ride with the 170's. Spinning? Not really all that comfortable with these longer arms.

Conclusions: You can find a way to single speed up and over anything, if you set your mind to it and choose the right gear. That said, I think crank length is a style question perhaps more than anything. If some are pre-disposed to lower cadence, it may be an indication that a longer crank length is necessary. Perhaps those who are spinners should look into shorter cranks. Finally, many 29"er riders may actually find 170's to be an enlightening experience, and I know I did.

Is there an "easy answer"? No. I still would suggest that personal experimentation is required to find ones own crank length that suits them best. Too many variables in the human species to say anything for certain. That said, I think my conclusions are worth considering, and hopefully will be a helpful guide to those looking for crank length solutions on a 29"er single speed.
Posted by Guitar Ted at 1:00 AM

I ran 180mm cranks on my KM, for a long time, but swapped out for 175s with my first One9. I found that my saddle height was different with relationship to the BB was a tad lower on the KM. I think that is one reason why it might be a bit harder to spin them, because your pedal stroke during the power transition is much longer.
I also found that I was not smacking the crank arms on the trail as much on the 175s, so that is where I stayed.

On a side note GT, I was wondering what your opinion is on how geometry, particularly TTube lengths is growing longer on MTB's. My old large is now a medium/sml. But the new frames leave so much seat tube out, which flexes, in order to get the same TT length..

@B: Not sure I'm catching your meaning. I will say that the change recently to 100mm travel as 'the standard" over the previously used 80mm travel has forced head tubes higher and perhaps to compensate for this, the manufacturers are lengthening top tubes slightly. Not sure I've noticed that myself, I'm just guessing that may be the case.

Certainly I would admit a trend since the late 90's to ever increasing top tube lengths on bicycles with a corresponding shift to shorter stems. Part of that is a reaction to the original Fisher Genesis geometry.

29"ers, coming later to the game, didn't ever really have "short" top tubes, and I would say several models, like the Karate Monkey, and Raleigh's XXIX, are still right in the ball park for TT lengths, even after several years of being in the marketplace.

One of our former product designers often spoke about his belief that shorter crank lengths made sense for 29ers.

His belief was based on the concept of spinning rather than mashing/torquing.

I think the human body is incredibly adaptable. Lots of stuff works. You just have to give it a chance.

@ GT: You caught my meaning. A 2000 model frame might run 595 effective TT length whilst the new breeds are out around 605-625mm. But they are leaving the seat tube lengths short 'for stiffness' but then you expose a truck load of seat post which is more flexible?? Anyway, sorry to hi-jack your comments. Was going to contact you to get you opinion but couldn't find a link.

As far as crank arm length; longer makes more sense to get things up and running with the better leverage. That 'slug' feel is the big thing I noticed when coming from 26 in. Once things are going though life rolls on much nicer. From a bio-mechanics/injury point of view; anything that causes excessive load on the knee is asking for trouble. Maybe its just easier to stick with gearing variations and 175mm that fit the middle ground for clearance, spinning and mashing?

@B: The seat post thing can be good. If it gets too long though, then I don't like it, nor do I feel comfortable running a bike with so much post revealed. Six inches or so seems about optimal which gets me a nice, compliance out of a Thomson post, for example.

As for the crank arm length, I would opt for the shorter, 170mm on a 29"er most times off road. Better clearance too. Better on the knees. However; the shorter cranks exacerbate the seatpost issue, so some bikes actually work better with longer cranks, all things considered.

I went and swapped out cranks 170mm V 175mm for comparison. Things I noticed:
- 175mm much easier to pop the front wheel up/mono.
- 175mm easier to get on your gear
-175mm feels slower once up and going
-170mm spin well when up and going but make me want a stiffer gear; and make me want an easier gear when getting started. (Gain Ratios)
Conclusion: the larger crank works better for me but to go out to 180 might just be too much if my little test here is further exaggerated with bigger cranks.
I am thinking the longer cranks should be better on the knees- when loads and stress are highest when dumping down power... A breaker bar makes life easier in the workshop so me thinks the principle of leverage would apply here too. Slight variations in knee angle etc will occur I guess but maybe high stress & load is more important to compensate for as far as knee issues go.
As has been said; we are all built different though.

Not many MTB frames let you have only 6 inches out these days. A 16.5 inch Niner (Med) has a TT of about 605 I think, suitable for someone up to 6ft. With the compact design and a 6ft dude's leg length, you are lucky to get away with 9-10in exposed. Hence they recommend 410mm post on a lot of frames. Plenty of compliance there ;-)
Swings and round abouts.... maybe the bike world will turn back to a smaller TT when they run out of marketing ideas.

When your tall a longer crank set just makes sense, especially when on a single speed.

Your bike will need to accommodate a larger crankset, Im 6'3" and use a 190mm crank length with an eccentric bottom bracket in the highest position, with no problems. That said most 29er hardtails have a high bottom bracket anyway.

As a road man of many years I have gone from 180mm to 175mm and now 170mm.
Conclusion? I'm tinkering with the transmission, the engine is just the same. Same power output just different places I can use it.
On the flat with a tail wind, stuff the 180's in a big gear and you can't be beat.
Climbing, 170's every time.
Regards Brennan.