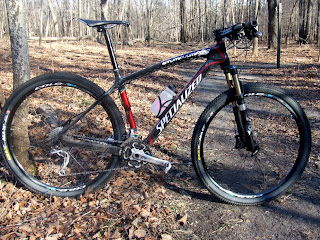 Saturday was all about the Turkey Burn ride at Camp Ingawanis' South Side. I got up late and moseyed on out there by about 9:30am, I suppose it was. There were three guys setting to go out, and they turned to wait for me, but I waved them on. It was cold and I didn't want them to catch a chill waiting for me to fumble through my stuff.

I saw Captain Bob's bike and another Orbea sitting there, but I didn't know where those two might be. I took off and rode a loop on my own. One thing that was quite apparent was that it was so cold the ground was frozen and that traction was endless. Basically, this is our version of "hero dirt". There was no way you could go too fast to break your tires loose. Well, not the AKA Geax tires I was running anyway! 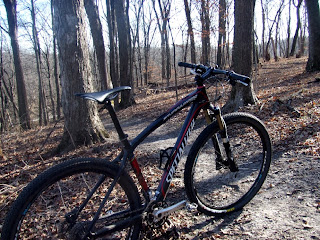 After running one lap, I got back where the three fellows ahead of me were just taking off their helmets and heading inside the big RV that was parked out there. Inside was Captain Bob, not feeling too well. He had a nasty cold or some other malady. He had done a bit of riding and settled in the RV for the duration.

We all chatted each other up for awhile, but then the party broke up. I went out for another lap before leaving. On this one, I scared up the big deer herd in the Camp and deer were scurrying all around me, and across the trail in front of me. In fact, it got a bit spooky after I noticed one big doe that walked alongside the trail not more than a few feet from me. I decided to stop and let the deer settle down and clear out while I snapped a few images. Then, I took off to find an empty parking lot, just like it usually is when I ride out there. A magical day for a ride. 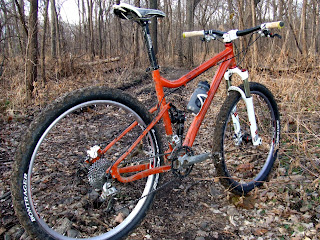 Then Sunday came and it was a whole different scene. I had a different bike with a new fork on it and with new tires on it as well. The fork was a shorter axle to crown affair and I had never ridden the Big Mama with a 100mm fork. Recipe for disaster? Well, consider the fact that the temperatures "soared" into the 40's, melting the top layer of "perma-frost" and the answer is "yes". Yes it was a recipe for disaster.

I have to explain the terrain I rode on. "Grease" is the name for the condition of the dirt I am talking about. Silty river fluff that is mostly black dirt and sand mixed together which holds plenty of moisture. Generally at this time of year it freezes, which is a fast, fun condition to ride on. When the sun hits bare earth and the temps get around freezing or above, then that top layer un-freezes and turns into this "grease". 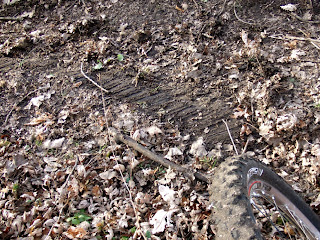 It might be a bit hard to understand yet, so let me offer this example: Let's say you have a tiled floor. Now imagine you have an inch of axle grease on that and some sand and leaves over this enough to camouflage the grease. Now imagine riding a pretty smooth two inch to three inch wide tire on that.

Fortunately I had on the new tires: Bontrager 29-4's, which are really aggressively knobbed affairs. Still, these were barely enough to keep you upright, and to be honest, a couple of times they didn't. But really, in a few of my spills, no tire would have helped. It was just that slick. I did manage to ride out a few slides and one was a true crossed up affair at speed through a corner. WooHoo! 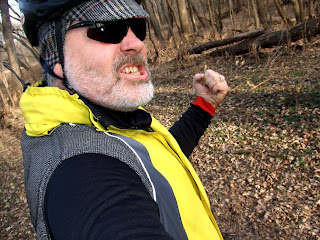 The best biff was the last of the day. Trail goes down into a shallow ravine, then hard right at the incline out. The tires gave way, and I got dumped off on the right side, falling on my right knee and right hand in the sticky black dirt. I actually slid forward to a stop about a foot, and then as I sat motionless, I actually slid backwards back down the slight decline a few inches. That tells you how slippery it was! If dirt could mimic slippery snow, this is it.

The funniest thing about the dirt when it gets like this is that it doesn't really stick to anything else but your tires. My frame showed no signs of this muck after I got home, and even my thermal tights were barely showing any effects of the greasy dirt on my knee after I got home. It is the strangest stuff.

All in all it was a great weekend. One day I couldn't fall down if I tried, and I pushed it hard. The next day I was tippy-toeing around the single track and I fell to the earth four times. Hero to zero. Keeps me honest, it does!
Posted by Guitar Ted at 1:00 AM

I'm sure I'm not your only reader who knows exactly what the condition was like... jinglecross had a couple slick spots

Great Turkey Burn ride! Glad that I made the effort to get out and ride with you guys. Always good to meet single track brothers from other places.