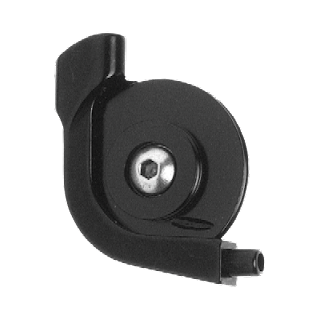 Problem Solved: I was having some issues with braking on my Badger I just got back up and going again, and I solved the issue with this little doohickey called a Travel Agent. It works really well.

The issue was that with STI levers, which are meant to pull less cable, but have a high mechanical advantage, the Avid BB-7 Mountain Disc Brakes were not functioning at an optimal level. They need lots of cable pull and a lever with less mechanical advantage.

The Travel Agents upped the cable pull to the point where I now have awesome brakes on the Badger. You can read more about it by checking my mini-review on these gizmos over at The Cyclistsite.com. 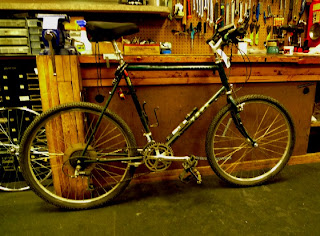 What's In My Stand: I had this old girl come through the other day. A Trek 850 Antelope model with under the chain stay roller cam brake.

It is a throwback machine to the mid-80's when mountain bikes were still made to mimic the Norcal geometry which itself was borrowed from "pre-war" Schwinn cruiser bikes.

This one is a "rider" so many of the original parts were gone, but the SunTour "XC" stem was still there and looking great. It's neat to see the old ones come through and it reminds you just how far things have come since the dawn of the modern mtb happened. 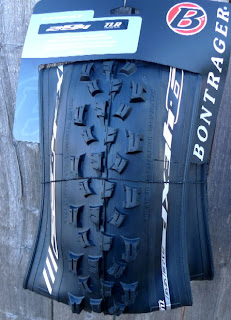 They Finally Showed Up! The much anticipated Bontrager 29-4 tires just "showed up" at the shop yesterday. I knew that the last word I got was that the tires would be sent out once they were available, and usually you get some advanced warning of shipment. However; this tire has been so long in the "coming soon" file that I had completely forgotten about them. (Which is absolutely cool and fun. I like surprises like that!)

Anyway, these are looking like they may be the perfect El Paso/Franklin Mountain tires. Makes me want to go down there now to try that theory out, it does! (Which would probably be a much warmer place than here right about now too!)

Anyway, I'll have to pop these on a rig quick and maybe I'll roll these for the Turkey Burn on Saturday at The Camp. By the way, if you make it out there Saturday, Captain Bob says he's bringing chili, so make sure you work up an appetite! Bonus: Weather is now predicted to be a bit warmer than previously thought! WooHoo!
Posted by Guitar Ted at 1:00 AM

Good comments on the travel agent. I have always wondered if they worked as advertised. Reminds me a lot of the JTek Shiftmate. Which I have personally used with great success.

Mark - Good luck at the camp - I know you are going to like it. Just imagine - if we ever got a bridge to cross the creek ... still it is close to as good as it gets
John

@George: They will be pretty good I think. They roll faster than you might suspect, by the looks of them. So far, I haven't had real good conditions to test them in yet. (See Monday's blog post!)