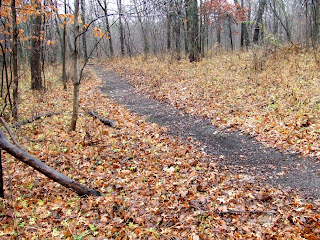 Saturday the trail crew was called in to action out at Camp Ingawanis. Several of us met to clear the trails of debris before winter sets in here.

We raked off all the dead leaves and branches were removed. Some plans were layed for re-routes.

It's going to be pretty good next spring and the crew that was there is pretty stoked.

Stay tuned for updates on the trail situation next spring.

Speaking of updates: Trans Iowa V7 Registration for the Rookies starts today. I'll be updating all the latest that I can during the day today on Facebook and Twiitter. A more complete update with folks on the roster so far, and any fun news, will be posted here later today and on the T.I.V7 site.

Need To Chat? Anyone out there wanting to have some ideas bounced around concerning set ups, strategy, or just wants general banter about Trans Iowa V7 can check out this Google Group: http://groups.google.com/group/trans-iowa

It's a group set up by some T.I.V7 folks that are in the event this time and is intended for the use of folks on the roster. (d.p. and I are not directly affiliated with this group on-line, but we gave it our blessing.)
Posted by Guitar Ted at 1:00 AM

You guys got anything going on for MTB rides or gravel grinders over Thanksgiving weekend? I'm going to be in the Waverly area that weekend and wanted to find some riding.

@Ben Bolin: There is a "Turkey Burn" ride being planned, probably for the Saturday after Thanksgiving at The Camp. Look for any announcement to be made on the blog here soon.

Cool! I'll bring the gravel bike and the MTB along. Let's get some good weather going for NE Iowa. It will probably be 70 and sunny in KC! Or not....