When the subject of this concept for a gravel grinder specific rig came up, I got a few comments about some other bikes that would be good for the job, and wouldn't require a "clean sheet of paper" approach. On one hand that is a very good way to go about this situation. I mean, why bother with all the bother if you can just get by with something already being produced and save money in the process? It makes sense, and it deserves to be discussed. Finally, to be perfectly honest, I looked long and hard at both of the following bikes and nearly pulled the trigger on both. Still might do that for one of them. 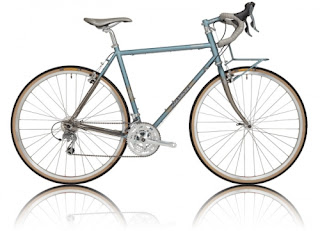 Salsa Cycles Casseroll (Version II): Here is a classy bike and it has been recently overhauled with some details that brought it close to being my choice.

What's Good: First of all, Salsa went with cantilever brakes, which make this an immediate contender. They added the front rack, which isn't necessary, but it is an interesting addition that I could make useful. The fact that it looks smashing doesn't hurt either. Cost could easily be contained by going with the frame set option, and using some old Campy stuff I already own.Finally, it has a relaxed, low-ish geometry.

So Why Not? Basically it boils down to the geometry and an unknown in tire clearance. I am pretty sure it falls shy of my 42mm ideal tire size, (web site states it can take 38's with fenders), so that isn't ideal for me. The geometry, while backed off from criterium steepness, isn't quite where I would like it either. Still a definite "maybe" here. 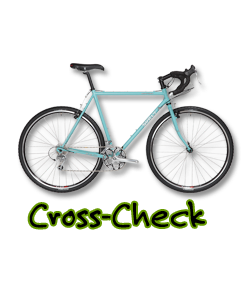 Surly Bikes Cross-Check: How many gravel grinders have at least one Cross-Check in their pelotons? I bet most if not all.

What's Good: The Cross-Check has some features that are spot on. Slacker head tube angle, big tire clearance. The new Robin's Egg Blue is stunning, and the frame is as reliable as tomorrow's sunrise. As with the Casseroll above, the Cross-Check supports a single speed option. Again, a frame only option leaves me with a cheaper alternative than going custom.

So Why Not? Again, the geometry isn't quite where I would like to see it. Another thing that I see as a strike against this frame is the heavier tubing used throughout. However; the tire clearance is enormous on the Cross-Check, and there is no denying its gravel grinding pedigree. Again, a definite "maybe".

A Note On Geometry: You'll notice I am being a stickler on the geometry deal. Why? Well, for two years running I have almost bitten the dust because the geometry of the bike I was riding down a really fast, loose descent caused handling issues I would rather not experience. I also have noted that over longer periods in the saddle, I like a more stable, "in the bike" feeling, and I can't find that in many of today's offerings.

The Cross-Check and the Casseroll both have elements of their design that I find attractive. If I could have an offspring of the two, I would probably go with that, but obviously, that isn't going to happen. So, I am exploring a custom bike that addresses my concerns and isn't a mountain bike. That was my mistake before: I insisted on single track-ability. Not so with this bike. I'm going for a pure gravel rig here.

So, stay tuned. I hope to hammer out some more details on this idea soon, and maybe, just maybe, I'll move on to actually having something made. And don't get me wrong- I may still end up with one of the two choices above. You never know........
Posted by Guitar Ted at 1:00 AM

I'm with ya there Ted. The Casseroll was soooo close for me. THat 73 dgree ha for my size and tire clearance was the deciding factor for me. Such a pretty bike though.

Don't take this the wrong way but this is one of the more interesting topics you've dived into in some time.

I'm waiting, and working through my own geo exercises in my mind, to see what you come up with in terms of geometry for this bike.

@Captain Bob: Yeah.....(sigh), still it could do for a pavement bike, but when do I ride pavement? Oh well.

Bet it rides OK, even with the hvy tubing. Get a Ti seatpost and ride happy.

@grannygear: I bet it would ride "OK" as well. That's just it though- "OK" isn't cutting it. I have several "just OK" gravel bikes already. This is a pursuit to refine upwards to something more purpose built for the task.

Although, I admit that the build you suggest would be fantastic for 75% of gravel riding around here.

What about the Surly LHT? Fatter tires, more relaxed geometry.

I do disagree with you on the seat tube angle. I like the 72 on my Fargo when seated, but it gives a rear weight bias that I don't like when standing. I see this bike as a mix of a more stable than CX/road bike with big tire clearance. To me that means a lower bb, slacker hta, and a higher rake fork. I would have a 73 deg set tube on mine though. I wonder whether the Paul brake will be the limiting factor for tire clearance, rather than the frame itself.

Potts steel, that is all.

Try this on for size: Go get one of them fancy schmancy new Cassies, have your local frame melter of choice cut out the rear dropouts and braze in some new plate dropouts with the axle moved back about 12mm and up a couple (I did the math, but now I forgot the exact numbers..) You'll drop both HA and SA by exactly .5 degree (to 72.5 and 73, respectively), and drop the BB by 5mm to put it right at 80mm. CS length goes to 43.5. Add paint to match. Sweet, no? You could prolly get this done for under $200, all done up nice and neat. Nice light tubeset, checks all the other boxes too.

@Jim Brown: Too touring specific. Too heavy from a tubing aspect. It's made to carry loads, this bike will not.

@Ben: Well, the Pofahl I have has a 71.5-72 degree seat tube angle, (depends on where in the shop I measure it), and I find that bike to be completely fine as to standing climbing and comfort. It also has a minimum chainstay length of just over 18", so plenty of room for the brake idea down there with slightly shorter chain stays.

@d.p. @ Erik: Not bad. I actually considered the Casseroll with a Plus Five head set race from Chris King. Trouble with that idea is it raises the BB. The drop out idea is interesting, but the frame + 200 bucks starts to get pretty close to a custom and I wouldn't have any warranty/recourse if it didn't pan out.

I think Fork Rake might be the key for a nice ride on gravel.

Don't know if a Steelwool Tweed would fit the bill but you get a lot of build options with it. I've got one set up as my touring bike and it's been great. Not the lightest but you could keep it reasonable with the right components. Seat angle is probably too steep to make it a contender but I think it's worth a look.
http://www.steelwoolbicycles.ca/bikes/tweed.html

I suspect the Casseroll will be pretty generous in the clearance department, based on history, but yeah, it won't run the 46s I have on my Vaya right now, I doubt.

The Vaya would be a strong contender on many levels, but it's got the wrong brakes for you, and it's not SS-able, so it' falls down on two important fronts, for the purposes of this project. But in just about every other respect, it's perfect.