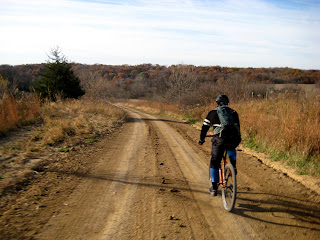 <===photo by d.p. of me running down some B maintenance road somewhere....

Update On Registration: Yesterday was the first day of closed registration for Trans Iowa V7. The first part of registration is over: That being the letting in of anyone who has ever finished a Trans Iowa that wanted back in for V7.  This did not include all you "rookies" that e-mailed me thinking you would get into Trans Iowa V7. Your e-mails were summarily deleted. I suggest trying to read and comprehend the following carefully!

The next wave of registration will not include the Rookies. Do not send a post card yet! Your time will come on November 15th, and you had better do it right, or you'll be summarily dumped again! Got that? okay, let's move on to Stage Two of Registration for Trans Iowa V7.

For The Veterans Only! According to my count, 20 past Finishers of Trans Iowas took up the gauntlet thrown down by Trans Iowa V7. That leaves 80 spots on the roster to be divided up between the Veterans and Rookies. So, you Veterans of past Trans Iowas can plan on competing for 40 spots. Four-Oh! Foe-dee! Got that?

Here is how you, and only if you are a Veteran of a past Trans Iowa, can claim a spot starting on November 8th.
Your entry must be on a Postcard with the following information clearly written so I can read it!!! The following items MUST BE FILLED OUT CORRECTLY!!

#1: YOUR NAME
#2: CLASS ENTERED- (Choose one: Men's Open, Woman's Open, or  Single Speed/Fixed)
#3: A CELL PHONE NUMBER- (Must be one we can reach you at on race day weekend)
#4: YOUR E-MAIL ADDRESS- (Only will be used to make announcements for Pre-Race, etc.)
#5: ANSWER THE FOLLOWING QUESTION CORRECTLY: "What cycling event took place Easter Sunday, 1897?"

All Five Requirements Must Be On Each Post Card And The Question Must Be Answered Correctly!  I reserve the right to reject any illegible cards, (judged by me to be illegible), so WRITE CLEARLY!

Post cards must be sent to: Trans Iowa, 4302 University Avenue, Cedar Falls, IA, 50613 NO SOONER THAN NOVEMBER 8th!!! Early post cards will be rejected. All post cards will be entered on the roster in a first received, first on roster basis until all 40 spots have been claimed by Veterans Only!

Remember: NO ROOKIES YET! Rookies will have their own special question to answer, so any cards received by rookies will be thrown out if received before November 15th, when those 40 spots will be up for grabs. Details on Rookie Registration will be announced on November 9th.

Got it? Any questions? Better hurry and ask them now before we get the ball rolling again.

UPDATE: And DO NOT CALL MY WORKPLACE!! Anybody else calling Europa Cycle and Ski with questions will be DQ'ed. The procedure is to e-mail me!! Thanks!!
Posted by Guitar Ted at 1:00 AM

The finishers deserve their own right of entry - those guys are beyond human!

Huge Thanks to you and DP for putting this event on!!!

The registration is fair to all and gives the rookies a chance to go nuts like the rest of us.
thank you,

So, I was a rookie last year who didn't start - can I register this week or next week?
John