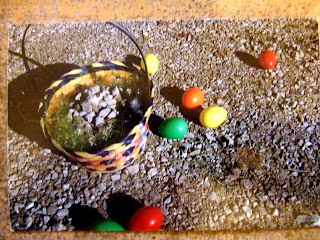 <===Out of 100 postcards this was the only one with an Easter/Gravel theme.

Well, the registration process is over. Now what? Here's the deal for now....

The Waiting List: Unless there are some post cards that arrive today, there will not be a Waiting List. Tomorrow is the last day any post cards will be accepted. If someone, or two get on the list, in all likelihood they will get on the roster. (Last year I transferred in six folks) This Waiting List process works like this: If anyone for any reason on The Roster will not be in T.I.V7, they e-mail me ASAP upon making that decision and I will then contact #1 on the Waiting List. (Again.....if there is one!) If no waiting list is necessary, then I still will want to get the notification of the drops for other purposes, but that will not affect you racers still in the mix.

It is quite possible that the roster will start shrinking sooner than later due to the nature of this year's registration. I will not add riders in a week, two weeks, or even next Tuesday if we do not have a Waiting  List, so don't even ask.

Okay, beyond the possible Waiting List action and the impending and inevitable roster shrinkage Trans Iowa news will be limited to the odd sponsor announcement, and rare mention for the next few months. I don't expect any big news, so essentially T.I.V7 will be going off the grid here until March most likely, when the whole deal will kick back into gear in preparation of the April 23rd start at 4am.

Of course, all of you will be busy training. Hopefully the winter will be conducive to getting in the miles you need where ever you are at. So, for now it is time to move on to other things here on this channel unless I get some big news to share. Happy Training!
Posted by Guitar Ted at 1:00 AM

I was curious to know how many different states are representing. 3 of us are coming from Illinois and Dr. Giggles from New York.
Ari

@Ari: Well, it isn't easy to tell. Not all the postcards are post marked and of course, any sent in by overnight services have no return addresses either, (usually).

Here are the states I can tell you about....

I can't tell for the last two states. I think one of the guys is in Ohio, and Lance Andre is kinda from Florida.

That's all I can make out.

Thanks G.T. The list is much longer than I thought it would be. Now we pray long and hard for dry weather.
ari